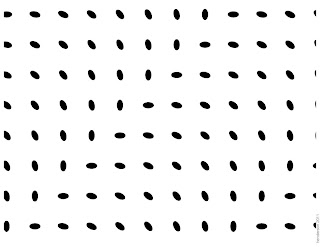 It was the very familiar images, those that immediately present the observer with an optical illusion, that first attracted me to the works of Bridget Riley.

Many of these works have an obvious geometrical element and lend themselves to analysis, whereby one can work out how to recreate them digitally.

The image that I have reproduced here (a pale imitation of the many similar images by Bridget Riley herself) has a simple procedural description.


The black lozenge shape is the same wherever it appears in the image, apart from its orientation.

Now the second row is the same as the first row, except that the lozenges have been shifted one place to the left.

And the third row is the same again, but with another one place shift. The entire image is now described by this procedure for constructing it.

The optical illusion is that, viewed as a whole (perhaps from a distance), there is the appearance of waves on the surface of the canvas. This is presumable the effect that Bridget Riley imagined and achieved in her images based on this idea.

In the original, the optical illusion is much more effective than it is here. Standing before a canvas with a version of this image on it, the waves appear to stand proud of the surface and the eyes refuse to register a flat geometric pattern, which is what we know it to be.

Bridget Riley produced various versions of this pattern, sometimes black on white as here and sometimes white on black, which is even more effective.

For example if some of the black lozenges above are printed in shades of grey, such that the greyness changes uniformly accross the canvas, a misty appearance is produced. This mistiness seems to float above the canvas.

I have tried to achieve a similar misty effect in images of trees shown here in earlier posts as Work in Progress, but only with modest success so far.

This is another situation where it is significantly worthwhile to see the work in the original, where the optical effects can be stunning. I have yet to achieve anything similar in a digital image.