I encountered Mary Martin's enormous work Inversions at the Tate Modern a year or so ago. It made a huge impression on me. It's over twenty foot long and six foot high, occupying an entire wall.

But the most stunning aspect is the fact that it is an array of aluminium plates, polished and angled to collect the light in the most arresting fashion.

On closer inspection you realise that the aluminium plates are not angled arbitrarily. There are 96 plates altogether arranged in 24 columns of 4 plates (hence the aspect ratio). Each column of 4 plates has each plate in one of the possible four rotations of a square. The plates are of such a shape that when viewed from directly in front their elevation is that of a square.

It turns out that there are exactly 24 distinct permutations of 4 things and the artist has arranged it that each column is different, being one of the possible 24. Moreover, adjacent columns are so organised that no two adjactent plates are in the same orientation. 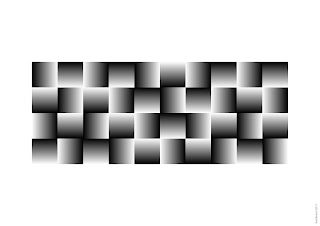 Motivated by this discovery, I attempted to make my own image based on this idea. The result (sistema 5) is shown here. I chose to arrange only 10 columns, which produces a simpler aspect ratio for conventional framed prints, although I plan eventually to produce a version with exactly Mary Martin's arrangement of orientations.

Let's hope it's still on view when I go back to the Tate next week (added later: it wasn't).