In the National Gallery of Art sculpture garden there is the most fantastic construction by Sol Lewitt, his "Four-sided Pyramid". My recollection is that it is about 12 foot high and probably 20 foot square at the base. Standing next to it in the Washington Autumn sunshine is a life-affirming experience.

Once you've encountered this construction be LeWitt, it's impossible not to investigate the artist further.

His portfoliio is amazing. Not only are their sculptures like this pyramid but there are whole essays of images and narrative to discover. 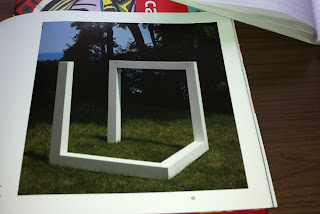 One of the most interesting is his essays on Incomplete Open Cubes, where he builds cubical frames with one or more edges removed. These constructions are then laid out in particular arrangements that illustrate their variety and openness. LeWitt constrains the incomplete cubes in two ways (it seems). First there must be edges in all three dimensions. Second, all the edges must be attached to make a single component. Enumerating the objects with these constraints is no mean feat.

I was inspired a year ago to build something of the open-cube variety, which I did by making my computer-generated construction consist of sixteen cubes pushed together into a single open-cube with internal structure. 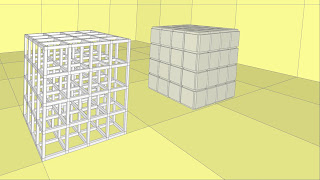 I did this at a time when I was influenced by Rachel Whiteread's sculptures based on Negative Space, where she fills the voids in an object (e.g. a bath, a house) with material and displays the object that is created when the mould is removed.

I played with the Negative Space in my Open Cube, filling the gaps in the open cube with material, generating the structures you see here. I found that quite satisfying.