The Church at Domburg

This is a first attempt to reconstruct an early Mondrian. 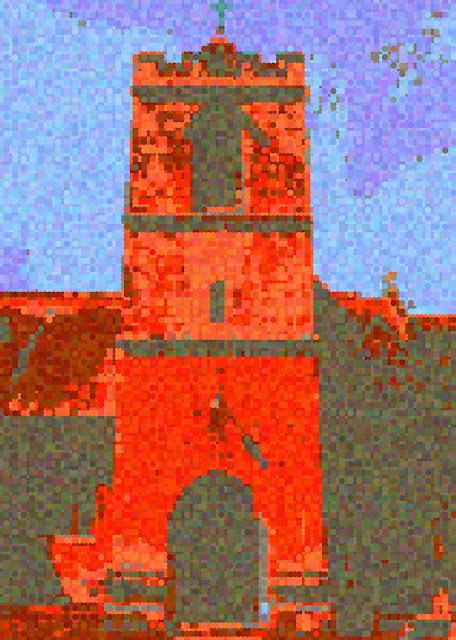 This is a geometric design. The image has been created by a regular pattern of circles, laid out according to a specific geometric description (see below).

The colors have also been chosen mathematically, selecting initially from a palette of just eight shades, but with a random variation of about 10% in the intensity of that shade.


I realise Mondrian didn't use circles. I'm not trying to get close to him in detail, just in color and impression. The method seems to have worked. Could do better with the colors.


The method I used is as follows. Over an original photograph in the aspect ratio 2:3 common from 35mm days I laid a grid of 100 by 150 squares. I extracted the color from each grid square and reduced it to the nearest equivalent from a palette of 8 shades. I then replaced each grid square with a circle whose diameter is equal to the diagonal of the grid square and painted it in a new color derived as follows. For each of the 8 shades in the original palette, I selected an alternative from another palette of 8 shades. This was primarily to ensure that the main body of the church came out reddish. Finally I painted each circle with the new color allowing a 10% shift towards either white or black (so, a nearby color). The circles were painted in a pattern that (effectively) painted all the even numbered ones first and then all the odd numbered ones, hence the effect of some appearing on top of others.
Newer Post Older Post Home