Geometric Abstraction is alive and well

Geometric Abstraction is alive and well and has taken up temporary residence in Fulham. At least, for the next few days.


I stopped by the "From Centre" exhibition curated by Slate Projects and Saturation Point at The Loud & Western Building in West London and was hugely impressed. There are 50 or 60 works over three floors of a building that is ideally suited to their presentation. The space itself is geometric. It could have been purpose designed by Malevich himself.

The works are all recent, I think, but they are from artists both young and old. Even so, there is a consistency of style that makes the exhibition hang together well. If you don't find time to go (it finishes this weekend) you can browse the works and find the catalogue on the Slate website. There are a couple of decent essays in the catalogue.

There is so much good work here that it is difficult to pick out work to comment on. I could have probably picked anything, but I'll restrict myself to ones that particularly took my fancy.

This panel from Tess Jaray is considerably more impressive in the flesh than this photograph suggests. The semi-panel on the left is formed from black metal(?) that has been laser cut to expose the white painted background. This has the effect, when you approach it, of shimmering from the ambient light.


Up close, the precision and symmetry of the cutting are immaculate. This is geometry, pure and simple.

Let's look at another.

This optical painting by Patrick Morrisey is a considerable achievement. The optical effect is created simply by having the adjacent shades either fall away subtly, as they do vertically, or to contrast suddenly, as they do between the red and green.

The original is every bit as confusing to the eye as its reproduction here. It's probably not a painting you want to have as your constant companion, unless you enjoy the confusing visual effect, but it is a prime candidate for a gallery wanting to impress a punter as soon as they walk into a room.

Finally, take another look at the the picture with which I headlined this post. There are a number of such intricate works by Charley Peters on show here. They are all small. This one is the largest, I believe. The intricate use of acrylic and the geometric precision of the painting are bound to impress. 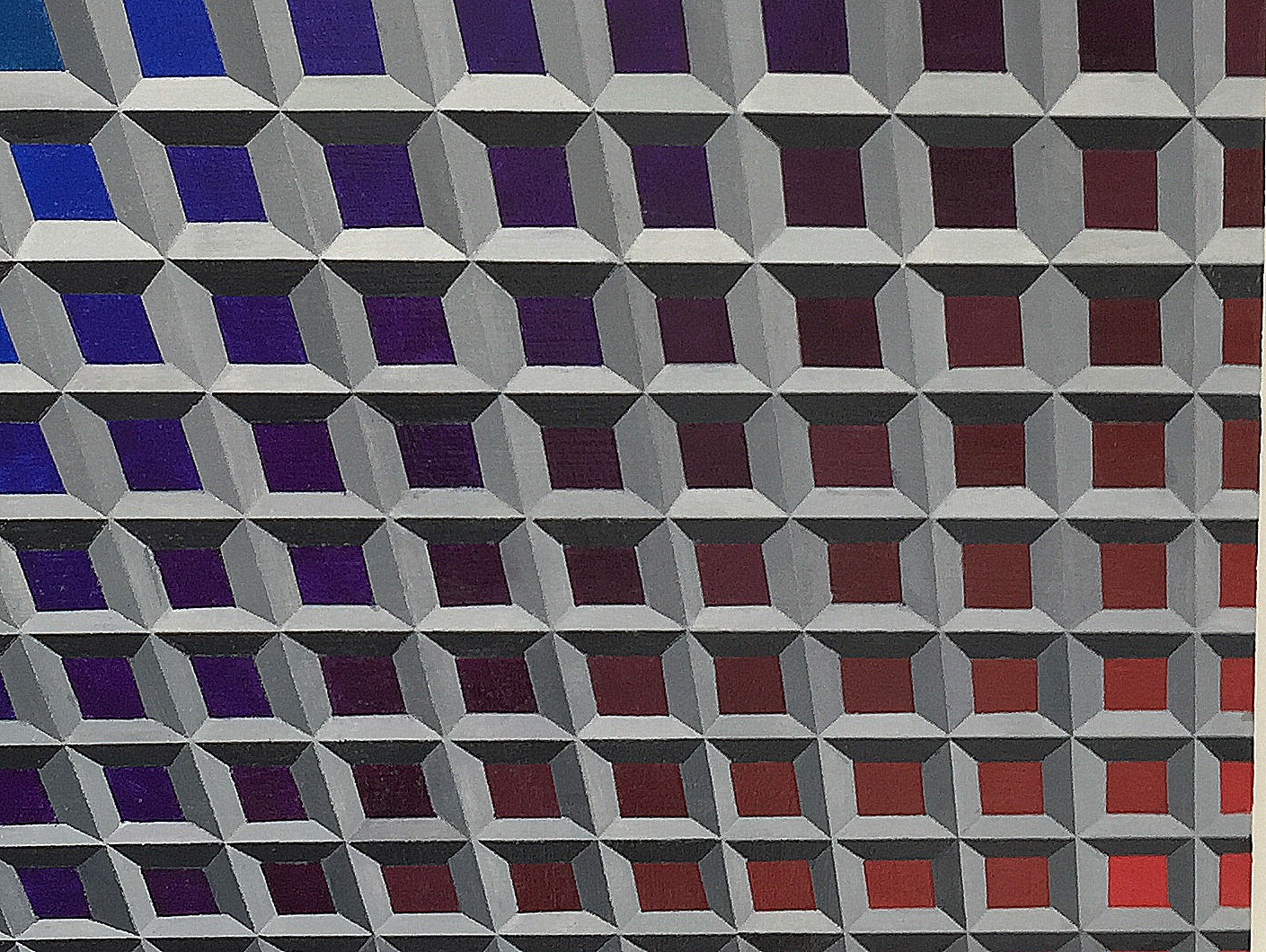 The geometry here is not just the regularity of the grill, but the obtuse perspective and the axial shading of the planes behind the grill. If I hadn't seen the work in the flesh, I would have sworn that it was computer generated. Axial fills of that sort are a common sign of computer work. Not that that would take anything away from it.

I have chosen three works. But I could have chosen any three from this lovely exhibition. We only stopped by because we were on our way to the Diebenkorn at the Royal Academy, and we had a couple of hours to fill. I'm glad we did. In the end, we stayed too long and had to rush off suddenly to make it to the Diebenkorn before it closed for the day.
Newer Post Older Post Home